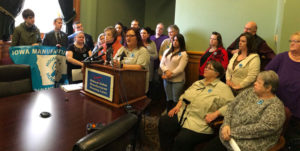 Iowans who live in mobile home parks are appealing again to Iowa lawmakers, asking for new legal protections against what they describe as predatory owners.

Carrie Presley, who lives in Table Mound Trailer Park in Dubuque and is president of the tenants’ association, spoke at a statehouse news conference late this morning.

“These corporate entities are coming after us like a virus and we don’t have the time for a cure,” she said. “You guys are it, so please — help us.” 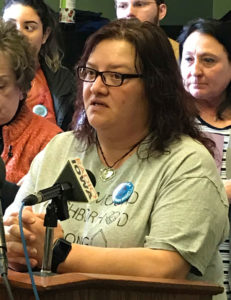 Angela Smith-Stoltz , who lives at Park Plaza Mobile Home Park in Muscatine, said if lot rents get too high, mobile home owners cannot afford to move their home to another location.

“It infuriates me on a personal level because these are my neighbors,” she said. “We are average, everyday, hard-working people just trying to get by and have a life.”

The bills that have been tabled would have addressed complaints about “no-fault” evictions from mobile home parks as well. A woman who only gave her name as Laura lives in the Gulf View Mobile Home Park in North Liberty

“Last Wednesday, while I was sitting in my living room, someone from the trailer park taped an eviction notice to my door because they lost my rent check. I quickly ran back and got my signed receipt saying I had paid my lot rent,” she said at the news conference, as she started to cry. “…I live in fear now that my house is going to be 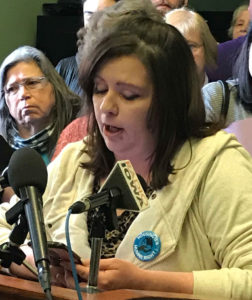 taken away. I’ve lived there 15 years. This shouldn’t happen to people.”

According to advocates of the bill, 36,000 Iowans live in mobile home parks. Republican lawmakers say they’re not going to impose in price controls when it comes to rent on mobile home lots, as it could prevent owners from maintaining the property. The bills that have been sidelined would have limited rent increases to the rate of inflation in most cases.