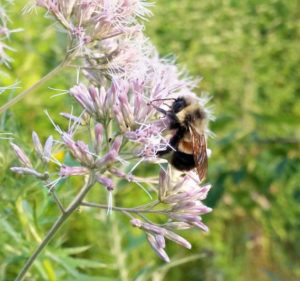 The U.S. Fish and Wildlife Service is asking for public comment from Iowans and others on a plan to save the rusty patched bumble bee, the first species of bee to be listed as endangered.

Agency spokeswoman Georgia Parham says the restoration plan has three main parts, the first of which is to encourage Iowans to improve the bees’ habitat by adding to our own landscapes. “Habitat that the bee likes includes prairies and flowers and gardens and all sorts of things that people can do to help it,” Parham says. “Then, other things like best management practices when using pesticides and research into some of the other threats that the rusty patched faces, like diseases from other bees.”

This species of insect used to be prevalent in Iowa and across the upper Midwest, but in the past two decades, the population has plummeted by nearly 90%. Parham says a large part of that is due to the widespread use of pesticides and the loss of habitat.

“Planting flowers that bloom from spring through fall is great for the rusty patched bumble bee because they need food sources all during spring, summer and fall, they’re around for a long time,” Parham says. “Those are easy things that any homeowner can do or anybody with a patch of garden or even a patio can do to help bumble bees and other pollinators.”

There’s been plenty of buzz in recent years about saving pollinators like bees and monarch butterflies. Studies find all pollinators provide services to agriculture estimated to be worth three billion dollars a year.  “They’re incredible assets to the ecosystem because they’re so important as pollinators,” Parham says. “That in itself is something that makes the rusty patched a really important part of our landscape and one that was quite common for quite a long time and is now facing extinction.”

The endangered bees have been confirmed recently in counties across mostly eastern and central Iowa: Allamakee, Black Hawk, Boone, Clayton, Jackson, Johnson, and Winneshiek. In addition, the bees are being found in Illinois, Minnesota, Wisconsin, and a few other states.

The U.S. Fish and Wildlife Service is taking public comments on its plan through Monday (Feb. 24) at the