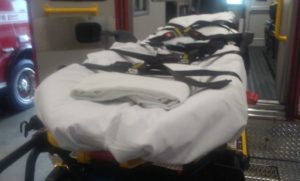 Emergency Services Director, Gary Brown, says they have one trained and he would like a half dozen. “We’re not looking at going over six. We want to be able to focus on a very small group of people and help them move their skill set along, and try to get encourage them to get involved in higher education and give them better skills to work in their own community,” Brown says.

He says the county EMT’s will train the volunteers as they ride along. “They do everything right along with us and it’s just a matter that they are another set of hands in the back of the ambulance,” Brown says. “All of our staff is pretty seasoned, and they like teaching, they like helping younger people move their skill sets forward. I think everybody on my staff is teaching at some level in the county. We’ve kept the trucks where we have a third seat for them to ride.”

Brown says the volunteers are covered under the county’s insurance program. “We treat the volunteers just like the paid staff –they have to go through orientation, they have to follow all of the SOP’s, they have to do everything,” according to Brown. “There is no division between a paid and a volunteer. They’re treated exactly the same, only they don’t get a paycheck. It’s very similar to what the sheriff is doing with the reserve program.”

Brown talked with the Woodbury County Supervisors about the plan, and they had no objection to the training.