You are here: Home / News / Reynolds says she’s comfortable with board recs on medical marijuana 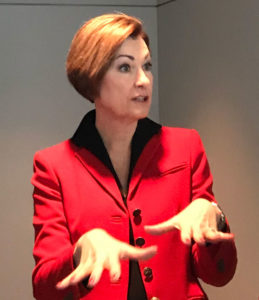 Governor Kim Reynolds says a state board has recommended an appropriate compromise on the amount of the key chemical that should be allowed in the cannabis products licensed for sale in Iowa.

“I’m comfortable with where the board ended up,” Reynolds says, “so they just met and I think that might be similar to the House bill just passed through committee.”

The state board that oversees Iowa’s medical marijuana program last Friday recommended a four-and-a-half gram limit on the amount of THC in cannabis products. THC is the chemical that advocates say provides relief for a variety of medical ailments.

“It doesn’t mean that in the future this is where it has to end,” Reynolds says, “but I think that’s pretty significant progress.”

The board also recommended setting no THC limit for terminally ill patients and allowing others to buy higher THC amounts if they have a doctor’s recommendation to do so.

Reynolds made her comments today during the taping of the “Iowa Press” program that airs this evening on Iowa PBS.

A Senate committee this week approved a bill that would allow a far higher amount of THC in medical cannabis products sold in Iowa. Lawmakers in both the Senate and the House say they’ve been waiting for the governor to publicly state what level would be acceptable to her since Reynolds vetoed a bill on the topic last year.