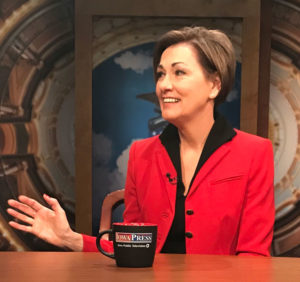 Governor Kim Reynolds plans to hold half a dozen town hall meetings this week to tout the “Invest in Iowa Act” she unveiled seven weeks ago.

The plan includes income tax cuts and would reduce overall tax revenue to the state by about $7 million. However, it would also require the governor’s fellow Republicans in the legislature to vote to raise the state sales tax by one percent. Reynolds spoke about her lobbying effort during an appearance on Iowa PBS this weekend.

“I’m going to work on it, but I think Iowans are going to ultimately be the ones to convince them to do it,” Reynolds said.

Reynolds indicated she would be open to adjusting the plan so the state takes overall, not just part of the costs of Iowa’s mental health care system. Those costs are currently paid with county property taxes.

Iowans for Tax Relief has joined the governor in touting the plan.

“Iowa is in competition with the rest of the country and especially our Midwestern neighbors to attract and retain people and businesses. Taxes matter and the best way to improve Iowa’s tax code is to cut income tax rates,” Iowans for Tax Relief president Chris Ingstad said earlier this month at a news conference in the governor’s office. “The legislation the governor has proposed cuts rates in both the short term and the long term.”

Another influential lobbying group — American for Prosperity — is registered as undecided on the legislation. ‘The bill allocates new sales tax revenue to the currently empty state fund that is to be used for water quality and outdoor recreation projects.