You are here: Home / News / Mason City native returns to Iowa for role in ‘Anastasia’ 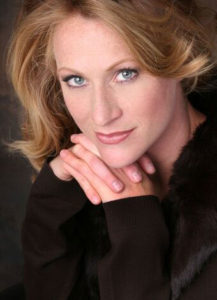 An Iowa native is returning to her home state to star in the touring Broadway musical “Anastasia” this week, the production’s first-ever stop in Iowa.

Alison Ewing, who grew up in Mason City, says the family show being staged at the Des Moines Civic Center features gorgeous sets and costuming, as well as wonderful songs, which will be familiar to anyone who saw the popular animated version of the story released in 1997.

“Our composers of the music are the same as that film, so if you were a fan of that film, you will see a lot of songs that you heard in that film and actually, it’s even more amazing because they’ve written several more songs,” Ewing says. “You’re going to get five songs from the film plus a whole lot more.”

Set in Paris in the 1920s, the story follows an orphaned teenager with amnesia who may be a member of the Russian royal family. Ewing plays Countess Lily who doesn’t appear on stage until the second act, so she’s had to learn to pump up her energy level so she can go from zero to 100-percent in moments.

“When she gets on stage, she sings this huge song, called ‘The Land of Yesterday,’ and she’s dancing, she’s doing Russian lunges and dances with all of the men,” Ewing says, laughing. “That part was…it took a little practice, let’s say.” She’s particularly fond of her show-stopping scenes with the character, Vlad Popov, a former romantic interest of the countess. “They do a tango dance and have this whole rekindling of their love song together,” Ewing says. “It’s just all physical comedy and I love it so much. It makes the audience scream with laughter, usually, if we do our job right, and it’s just so much fun.”

A 1992 Mason City High School graduate, Ewing says she learned early on to diversify and hone a variety of talents, which is why she took dance lessons, acting lessons, voice lessons and music lessons. Now living in San Francisco with her husband, Ewing says she’s able to pursue an array of opportunities in TV, film and onstage. She’s been with “Anastasia” since the tour started a year-and-a-half ago with another six months on the road to go.

Returning to Iowa to perform is a big thrill, she says, and she looks forward to seeing a literal busload of family, friends and fans.
“My dad lives in Des Moines so I’m sure I’m going to be spending a lot of time with him,” Ewing says. “Also, my mother is bringing the Mason City First Presbyterian Church, a group of people in a bus, so that will probably occupy a lot of my time as well.”

“Anastasia” has an eight-show run at the Des Moines Civic Center, starting tomorrow night and running through Sunday.