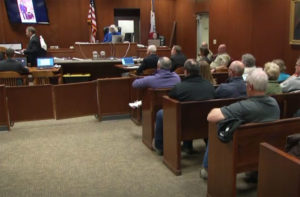 Some family members of Michelle Martinko were in the courtroom in Davenport Monday when the announcement came that the jury had found Jerry Burns guilty of first-degree murder in the killing of high schooler back in 1979.

Jurors deliberated for about three hours before returning the verdict. Martinko’s sister, Janelle Stonebraker, spoke with reporters after the verdict — and praised Cedar Rapids police officers who worked the case for decades.

“The Cedar Rapids police worked on this forever. And even when everyone else had lost hope they kept working on it and I think that’s absolutely amazing,” Stonebraker said.

New methods in DNA analysis and a family genealogy website led investigators to Burns. Stonebraker said the investigative work by the police ensured they had a case once the new technology came about. “Had they not collected that evidence early on and put it away for some later date when we had no idea what would be used with the DNA at that time — that really is amazing after 40 years,” Stonebraker said.

Burns now faces the prospect of life in prison. A sentencing hearing has not yet been set.