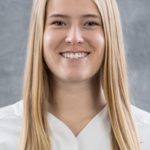 Iowa State’s Sami Williams was named the Big 12 Player of the Week on Tuesday following a historic weekend for the senior at the Gamecock Invitational. The native of Laguna Niguel, Calif., hit two home runs at the tournament, the second of which broke Iowa State’s all-time record. It was the 43rd home run of her career, surpassing the previous mark of 42 set by Cyclone great Tori Torrescano (2010-13).

Williams helped lead the Cyclones to a 3-1 weekend in Columbia, S.C., including a 5-1 victory over previously unbeaten No. 8 Michigan. Williams went 3-of-3 at the plate with three RBI, a home run and a double to help Iowa State pull off the upset. ISU has now won its last two games vs. top-10 opponents, dating back to a win over No. 8 Texas on May 10, 2019.

It is the second Big 12 Player of the Week honor of Williams’ career (Feb. 21, 2017). She is also the first Cyclone to earn weekly honors from the conference since fellow Cyclone senior Logan Schaben was named the league’s top player on April 23, 2018.