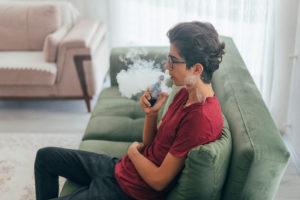 A survey finds nearly one quarter of Iowa’s high schoolers vape and critics say new federal regulations on e-cigarettes are having virtually no impact toward heading off the epidemic.

Matt Myers, president of the Campaign for Tobacco-Free Kids, says the new policies are “entirely inadequate” and will not help stop a new generation of Iowa kids from becoming nicotine addicts. “There was a great deal of publicity about the new federal rule prohibiting the sale of certain flavored products, but literally thousands of flavored e-cigarette products remain on the market,” Myers says, “including many that are called single-use or disposable that look like a flash drive but have as much nicotine in them as a full pack-and-a-half of cigarettes.”

Studies find more than 80% of kids who use tobacco started with flavored products, while 97% of youth e-cigarette users puffed on a flavored e-cigarette in the past month. Myers says the packaging and the flavors clearly target youth, including cotton candy, strawberry and mango.

“There’s a bill pending in the U.S. House of Representatives that would ban the sale of all of the flavored products that have led to over 20% of Iowa’s high school students to using these products,” Myers says. “It’s called the Reversing the E-Cigarette Youth Epidemic Act and to vote on it is absolutely critical.” Myers says the new federal policies are “riddled with loopholes” and he notes, thousands of flavored e-cigarette products remain available at more than 100,000 locations nationwide, including convenience stores, gas stations and vape shops.

“It was a positive step, raising the age to 21, but we all know that if you make a product that’s highly appealing to kids, they’ll find a way to get it,” Myers says. “It was already illegal to sell to kids 18 and under, and yet over five-million American kids and over 20% of Iowa’s kids, have begun using these products.” The figures are discouraging, he says, as about six-percent of Iowa high schoolers smoke traditional tobacco cigarettes.

“The most recent survey shows that over 22% of Iowa’s high school students are using e-cigarettes,” Myers says. “That’s almost four times the number of high school students who are using cigarettes.” He encourages Iowans to call their members of Congress and urge them to vote for the pending legislation to ban all flavored vaping products.