You are here: Home / News / Honor Flights starting again with a new mission in Dubuque 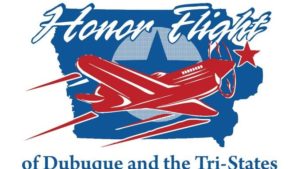 Honor Flights will return to northeast Iowa this fall with the Dubuque area being the hub.

The inaugural Honor Flight of Greater Dubuque took off 10 years ago with nearly 100 World War Two veterans on a one-day trip to Washington D.C. to visit the memorial built in their honor. Director Perry Mason says they offered ten flights before shutting down.

“We closed down our honor flights because the mission was complete. Honor Flight National has now changed the mission to bring all veterans — starting with again World War Two veterans if they haven’t gone on a trip — Korean War veterans, and now Vietnam veterans,” Mason says. “So we are establishing Honor Flight of Dubuque in the tri-state area, welcoming all veterans that have not gone on an honor flight.”

Mason they’re hoping to do back-to-back flights this fall, tentatively set for September 21st and 22nd. The trip is free for veterans, but it does cost the hub about 600 dollars per person. He says the were able to raise funds in a lot of ways for the past flights.
“It was really a cool thing to watch, because there were little kids who did lemonade stands and brought their money to Honor Flight. We went to corporations for grants and the general public, they were very generous. Everyone came out of the woodwork to help us,” Mason says. He says they hope to get the same kind of response this time.

Mason says the Honor Flight announcement had already given them a lot of good feedback. He says it serves an important role for veterans. “The World War Two veterans, we were always told they never talked about their experience in the war. So, there was an opportunity for them to open up and tell their stories and maybe do some healing,” according to Mason. “And that’s what we hope we can accomplish here with some of the Vietnam veterans.”

He says the nature of the Vietnam War gave those veterans a different experience when they came back.  “When they came home they didn’t get the reception coming home like other veterans received,” Mason says. “This is going to give us and opportunity to let them know that — yes, what they did was appreciated — and we can say thank you,”

Any veterans wishing to go on the Honor Flight of Dubuque and the Tri-States this fall are encouraged to apply. Applications can be found on-line at honorflightdbq.org or you can call Perry Mason at 563-690-0815. Veterans will be called in the order that they submit their applications, with a priority given to World War Two veterans, followed by Korean veterans and then Vietnam. Veterans who are terminally ill will also be given top priority.