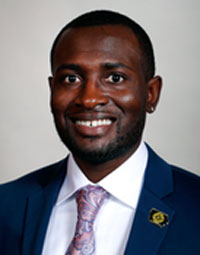 Members of the Iowa House mark Black History Month by giving a series of speeches shortly after the House convenes each day. Representative Ras Smith of Waterloo took his turn at the microphone in a different direction.

“We have a propensity to read about iconic African American figures throughout history,” Smith said, “but, for me, I’d like to use this time as a reflection of where we’ve been and where we’re going.”

Smith, who is one of five members of the House Black Caucus, said as a child he wondered why there was a Negro National Anthem.

“So as an adult, the reasons why the Negro National Anthem exists for me are as clear as the North Star,” Smith said. “It is a story of a narrative that as a country we walk with every day and as a sometimes neglected reality that everything really is about race.”

Smith described the hymn as a story of resilience.

“The Black National Anthem continues to be a source of pride and truth as it speaks to the vast injustices that the African American community has gone through and continues to face,” Smith said. “As a piece of literature, the anthem is wise. While it harks back to dark days, it’s steady — leaning forward into better days.”

Smith ended his speech with this: “For me, sometimes Black History Month is the complex understanding that I will truthfully and fiercely stand here every morning, place my right hand over my heart and pledge allegiance to a flag that wasn’t meant for me, yet still I will defend it any and every day.”

“If African Americans or any people of non-white descent  are significant to our country, then our stories are and they should be integral to everyday life,” Smith said, “not just the shortest month of the year.”

Smith said his goal was to convey “vulnerable thoughts” to his colleagues in the legislature and he hopes his remarks also represent the story of America that’s still being written.