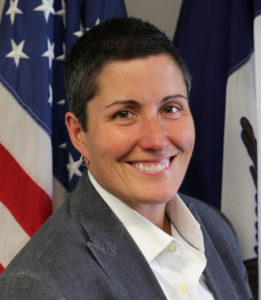 A bipartisan group of state senators has voted to confirm Beth Skinner as director of the Iowa Department of Corrections.

Senator Rich Taylor, a Democrat from Mount Pleasant is a retired correctional officer. He urged his colleagues to support Skinner. “She has some very honorable intentions, I believe, and she wants to move the department forward, She’s not afraid like some of the last directors that we had that are afraid to say: ‘We need more help,'” Taylor said. “…As she put it: ‘This is a new day.'”

Forty-five senators voted to approve the governor’s appointment of Skinner to lead the state’s prison system. Three voted no. Senator Nate Boulton, a Democrat from Des Moines, said he’s concerned about the safety of officers on guard in the nine prisons around the state.

“In the last month, four separate assaults have taken place and I’m not talking about somebody getting shoved,” he said. “I’m talking about closed fist, direct assaults (by) inmates upon corrections officers.”

Boulton said in one of those instances, it was an inmate who jumped to the defense of an officer. Senator Brad Zaun, a Republican from Urbandale, said Skinner has expressed concern about staffing issues and it’s up to legislators to find the extra money.

“We’re going through the process and I know that she’s an advocate,” Zaun said. “…She’s one of them. She’s been in the Department of Corrections for years. I don’t know of any other time or any other director who’d probably be a better advocate.”

Skinner is the second woman to serve as the top officer in the Iowa Department of Corrections. State prisons are located in Anamosa, Clarinda, Fort Dodge, Fort Dodge, Mitchellville, Mount Pleasant, Newton, Oakdale and Rockwell City. As of today, there are about 8500 inmates in the state prison system. Thousands more are under supervision in work release, probation, and other prison-related programs.