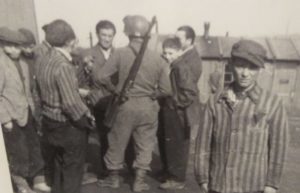 A photo from the Tott collection

A selection of historic photos from 75 years ago are on display at the downtown museum in Sioux City.

Vernon Tott of Sioux City was serving in the U.S. Army’s 84th Infantry Division that was moving through Nazi Germany near the end of World War Two rounding up German prisoners when they discovered the Ahlem concentration camp near Hanover.

Museum Curator Matt Anderson says Tott, was able to capture some photos of the starving Jewish prisoners found in the Holocaust Camp 75 years ago.

“Vernon had been carrying a small camera with him all through is time in the Army. Even though he wasn’t supposed to — he snapped photographs of his experience that day — and they were just in the camp for a brief period, I think it was an hour or two, and he captured some striking images of what was going on there,” Anderson says.

Tott came home and put the photos he had taken in a wooden box and did not look at them until 1997. That’s when he read a notice in his army unit’s newsletter from Benjamin Sieradzki, an Ahlem survivor seeking the GI who had taken those photos during the camp’s liberation.

“It came to light that he had these and he was actually able to track down some of the people who were in the photos that were still alive,” according to Anderson. “It’s another way that we have a Sioux City connection with a terrible but historic event.”

Tott contacted Sieradzki and that led to them finding 15 other camp survivors before Tott’s death on March 1st, 2005 at the age of 80. Vernon Tott was honored by the Holocaust Museum for his efforts and has his name inscribed on a wall there as a Liberator.

Selections from the Vernon Tott Collection will be exhibited through April 19, 2020, at the Public Museum downtown.