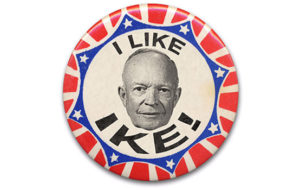 A new exhibit opening up at the Grout Museum in Waterloo today looks back at the way people used to express their political support. Museum spokesperson, Jenny Bowser, says people did a lot to show their political beliefs before we had social media.

“Our ‘Pin It To Win It’ exhibit is about campaign paraphernalia over the history of our country. King of how we adorn ourselves with different types of material that tells other people what we are about,” she says, “who we are supporting, what we believe, things like that.” The exhibit covers the entire realm of campaigns.

“We are covering national, state and local. And then on top of that, we are going to have some causes sort of buttons — you know ‘Give Peace A Chance’ — stuff like that,” Bowser says. She says there are a lot of different items in the collection.

“We’ve have delegate badges, we’ve got buttons, we’ve got combs, we even have for national, we even have a Jimmy Carter peanut radio. Pencils, pens, cups, stuffed animals, games, coloring books,” Bower says. One other item stood out to her.

She says they have a small fob bracelet that is actually a music box. “I’ve never ever seen one before this. It just says G-O-P, so it was probably at a national convention. They were given out as tokens,” Bowser says. She items will likely spur memories for people of past campaigns. Bowser says some of the items — like political signs — haven’t gone away even with the use of other messaging.

The exhibit will run through the November election. Admission to the Grout Museum is 12 dollars for adults and six dollars for veterans and children, and the admission includes access to the Pin It To Win It exhibit.