You are here: Home / Sports / Iowa’s Doyle named B1G Player of the Year 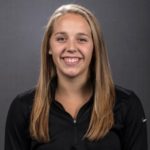 Iowa senior Kathleen Doyle has been named the Big Ten Conference Player of the Year, as voted on by the coaches and media.

The native of LaGrange Park, Illinois, is the sixth Hawkeye in program history to be named Big Ten Player of the Year. It is the third consecutive season that a Hawkeye has won the award after Megan Gustafson won the past two seasons.

In 18 conference contests this season, Doyle averaged 19.8 points, a conference best 6.3 assists, and shot 47.2 percent from the field. She registered double figures in all of Iowa’s 18 games, including two 30-point games and seven additional 20-point games. Doyle assisted five or more baskets 13 times. She had a career game against No. 12/13 Indiana, posting 31 points, 10 assists, and 9 rebounds against the Hoosiers and led the Hawkeyes to victories over regular-season Big Ten Co-Champions Northwestern and Maryland.