You are here: Home / News / Iowa’s largest archery tournament is on target for this weekend 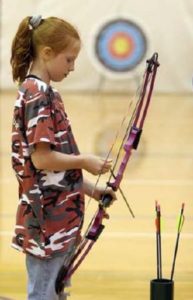 The state girls’ basketball tournament isn’t the only major sports event underway in Des Moines this week. The 14th annual National Archery in the Schools Program State Tournament will be held this weekend at the Iowa State Fairgrounds. It’s the largest youth archery tournament in Iowa.

Zach Benttine, archery coordinator for the Iowa Department of Natural Resources, says there are two types of competition, including Bullseye.

“It’s a square target with a scoring ring, so it’s circles and they score from ten points down to one point,” Benttine says. “There’ll be 50 targets for each flight and we can have two archers per target, so we’ll have 100 kids shooting. The first line will start at 8 o’clock and we’ll shoot every hour on the hour for 20 flights between Saturday and Sunday.”

The second type of competition is called 3-D and students will be aiming for styrofoam animals, ironically, at the Pioneer Livestock Pavilion.

“We’ll have a turkey, a white-tailed deer, an antelope, a big-horn sheep and a coyote,” he says.

The tournament will draw nearly 2,700 students from more than 90 Iowa schools in grades four through 12. All competitors will be using the same type of 20-pound bow. Benttine, who took part in this tournament as a student in 2011, says you can be the most athletic kid in your school and it won’t give you any advantage in this sport.

“Archery is all about mental focus,” Benttine says. “Teaching resiliency is a big one because one bad mistake doesn’t end your day. You need to think about it one arrow at a time. For Bullseye, you shoot 30 arrows for score for a total of 300 points.”

Top winners will be awarded prizes — including scholarships and equipment for their schools — and a chance to compete at nationals. Launched in Iowa in 2006, the National Archery in the Schools Program has grown every year with more than 4,100 students competing statewide in 2020.