You are here: Home / Fires/Accidents/Disasters / Iowans are warned to fight their burning desires due to high wildfire risks 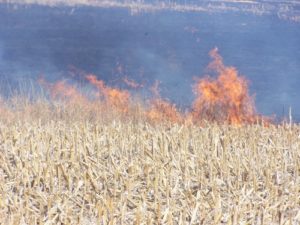 Iowans are warned not to do any outdoor burning today as the risk of wildfires is highly elevated.

Meteorologist Craig Cogil, at the National Weather Service in Johnston, says all three tiers of counties across southern Iowa are under a Red Flag Warning, essentially everything south of Interstate 80.

“We have a combination of relatively mild temperatures, low relative humidities and strong winds, generally above 25 miles an hour and certainly, the winds are going to be plenty strong today,” Cogil says. “In those conditions, especially with dry grasses and that area of the state hasn’t seen a lot of rain lately, if you do get a fire, they tend to spread very rapidly.”

Parts of southern Iowa have only gotten a quarter-inch of rain in the past month, less than 25% of average. With still-warmer weather forecast for the weekend, is it possible we’ve already seen the last of winter? Cogil’s doubtful. 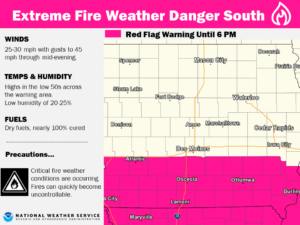 “We’re going to see highs up into the 60s and even into next week,” Cogil says. “It doesn’t look like we’re seeing any real big cold push down into the state over the next week. Winter is certainly taking a sidestep away from us for the timebeing but certainly as we head through the end of the month and into early April, we could still see it rear its ugly head again.”

A splendid late winter weekend is just ahead, Cogil says, as we’ll have mostly sunny skies and temperatures more than 20-degrees warmer than normal.