You are here: Home / Fires/Accidents/Disasters / ‘Mayday’ scare for Waterloo firefighters during restaurant blaze 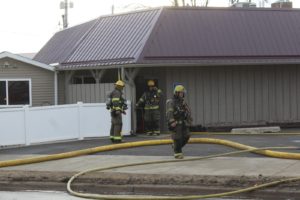 A popular Waterloo restaurant was heavily damaged by fire early this morning. Firefighters were called to The Wishbone shortly before 5:30 a.m. after a passing Waterloo police officer noticed smoke coming from the restaurant.

Waterloo Fire Chief Pat Treloar says there was a large fire inside the building when crews arrived.

Upon entering the front of the eatery, firefighters had to deal with a tense situation, as Treloar says one firefighter went through the floor in the dining area.

“Fortunately, he didn’t go all the way through to the basement,” Treloar says. “A couple of other firefighters close by were able to grab him before he went through. They called a ‘mayday’, which is very uncommon. Fortunately, our guy is okay.” 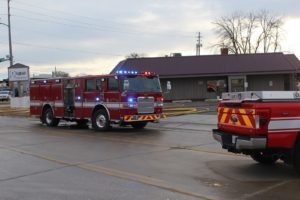 “Mayday” is a term used by firefighters on scene to alert others of a firefighter in distress. Treloar says the firefighter was shook up, but was not transported to the hospital and no injuries were reported.

It’s too early to know what sparked the fire or where it began. The city fire marshal is investigating.

The Wishbone has been a fixture in Waterloo since the 1960s. A local couple, Randy and Cindy Hellman, bought the business in 2010 and later added a small bar to the restaurant. Randy Hellman says they hope to get The Wishbone running again as soon as possible.

“It’s going to be quite a while. Smoke damage destroyed the whole building,” Hellman says. “It’s hard to say right now (when the reopening might be). My plan is always to get it back open and get my employees back to work, get my friends and family – all of them – back to having a good Wishbone again.”

The Hellmans employ around 20 people at the restaurant. In addition to The Wishbone, they also own Dairy Cream franchises in Charles City, Waverly, Webster City and several in Waterloo.