You are here: Home / News / Record releases into Missouri River being trimmed at last 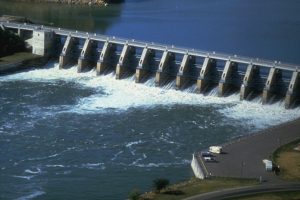 Officials with the U.S. Army Corps of Engineers say the big upstream reservoirs on the Missouri River are ready for spring snowmelt — and possible flooding.

Corps engineer Mike Swenson, in the Omaha office, says they already have hit their flood storage goals and are starting to cut back flows from Gavins Point Dam, upriver from Sioux City.

Corps officials say releases will fluctuate up and down frequently as we head into spring as part of an “aggressive strategy” to maintain flood storage space for as long as possible.

“As the Plains snowpack continues to melt, releases will be adjusted as needed based on reservoir system and downstream conditions,” Swenson says. “Releases will remain above average as conditions allow in order to maintain more flood storage for a longer period of time.”

The Corps reports snowpack in the mountains of Montana and Wyoming is now over 100-percent of normal. Officials say runoff has contributed to rises on downstream river levels with the potential to cause setbacks to levee repairs, while cutting back releases from Gavins Point should take the peak off higher river stages.