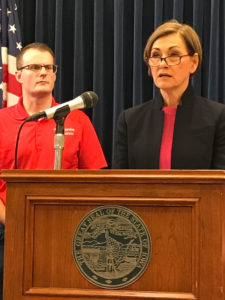 According to a news release from the governor’s office, all three are from Johnson County and had recently been on a cruise to Egypt. None require hospital care and they are in self-isolation at home. Governor Kim Reynolds held a news conference early this evening to make the announcement.

“While this news is concerning, it’s not cause for alarm. The most important thing that we can do right now is remain calm, understand the situation and stay informed in the days and weeks ahead,” Reynolds said at the start. “We are committed to transparency and keeping the public informed.”

Public health officials say the three tests are considered presumptive positive until confirmed by the Centers for Disease Control. State officials say two of the individuals are older adults, between the ages of 61 and 80. The other is described as middle aged. The governor says it’s not known if other Iowans were on the same cruise or who the three Iowans currently in isolation may have had contact with after they returned to Iowa on March 3rd.

“As we are here with you now, many more people are hard at work gathering the information that we need about the current cases to develop the best strategy moving forward,” Reynolds said. “We don’t have all the answers, but I can tell you that we are committed to keeping you updated as more information is available.”

“We think that this virus is spread through droplets which means an infected person who might cough or sneeze and then liquid droplets would land in the eyes, mouth or nose or even be inhaled by somebody nearby,” Pedati said. “And so that’s why we give a lot of the public health advice that we continue to offer when we talk about things like washing hands and staying home when you’re sick.”

“They have shared with me their best practices,” Corell said. “They have learned over the past weeks and I have now provided those to other departments across teh state of Iowa as we move forward to take on this virus.”

Some Iowa churches discouraged hand-shaking during the passing of the peace at services Sunday. Governor Reynolds said her church discontinued the practice of “intinction” — dipping the bread in wine — and used individual communion cups. The governor said those are reasonable steps to take and there’s no reason to let fear take over.

“We need to be reasonable. We need to do the right thing,” Reynolds said. “And we just need to be conscientious not only of our own health, but different things that we’re participating in.”

The first cases of this new strain of the coronavirus were identified in China in December. The outbreak has infected more than 100-thousand worldwide. Iowa public health officials say they have more than 450 test kits at the State Hygenic Lab in Iowa City and health care providers have been given the protocol for when to recommend a patient be tested.