You are here: Home / News / Ernst and King criticize Schumer’s remarks about justices 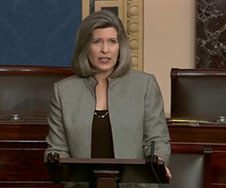 Iowa Republican Senator Joni Ernst is criticizing the Senate’s Democratic leader for comments he made at a rally outside the Supreme Court.

Last week, Senator Chuck Schumer told protesters the two justices President Trump has appointed to the Supreme Court would face repercussions if they uphold a Louisiana law requiring abortion doctors to have admitting privileges at a hospital.

“You know, he’s awfully good at pointing the finger at other people whether in the administration or congress for their lack of self-control,” Ernst said, “and here is the same thing coming from the Democratic leader of the United States Senate.”

“He was sending the harshest message I have ever heard from a member of congress to two members of the Supreme Court,” King said, “on the presumption that they were going to make a decision that he disagreed with.”

Schumer last Thursday accused Republicans of  “manufactured outrage” about his remarks, but Schumer also said he should not have used the words he used in reference to Justices Gorsuch and Kavanaugh.