You are here: Home / Sports / Iowa’s Garza is B1G Player of the Year 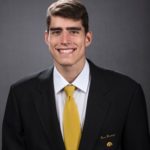 Iowa standout center Luka Garza has been voted the Big Ten Men’s Basketball Player of the Year by the league head coaches and selected media panel, the Big Ten Conference announced on Monday.

Garza was also a unanimous first-team selection by both the media and coaches. Sophomore Joe Wieskamp was a third-team all-conference honoree, while CJ Fredrick was selected to the five-player All-Freshman Team. Redshirt sophomore Connor McCaffery is the recipient of Iowa’s Big Ten Men’s Basketball Sportsmanship Award.

Garza becomes the first Hawkeye to earn the prestigious honor since the award was introduced by the Big Ten Conference in 1985. He is the fourth Hawkeye in program history and first since 1952 to be named, essentially, Big Ten MVP. Murray Wier (1948), Chuck Darling (1952), and Sam Williams (1968) were previous recipients of the Big Ten/Chicago Tribune MVP Award, which was presented prior to 1985.