You are here: Home / Agriculture / Study confirms many pluses to planting cover crops 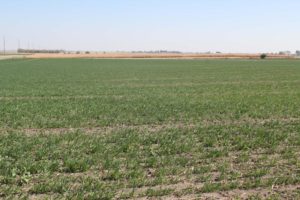 A ten-year study documents the conservation benefits of cover crops on farm fields and shows they’re a long-term tool for soil health.

Growers were asked to plant strips of cereal rye as a cover crop on their corn and soybean fields, leaving neighboring areas without it.

Liz Ripley, with Iowa Learning Farms, says after working out some kinks the first year or two, the results were so positive it was hard to keep farmers in the study.

“In the strips that had the cover crops, they didn’t see the level of erosion, right next door to fields that did,” Ripley says, “and compared to those other fields that weren’t participating in the trial, they could see how the soil moisture even was changing over time.”

Many participants bowed out after just five years to plant the cereal rye across their entire fields. Ripley says cover crops are an investment in a farm’s future productivity. The study sites were all in Iowa but she says the findings should hold up throughout the Corn Belt.

“They’re going to see very similar results in terms of the impacts on crop yields,” Ripley says. “When it comes to some of the other variables, here in Iowa, we have some really great soil. But a little further south, they start with a little bit lower organic matter, and so they can have the opportunity for faster increases in soil organic matter.”

Ripley says where small yield losses occurred, farmers made adjustments to how they plant their cash crop and were able to get back their expected yields.

Iowa Learning Farms and Practical Farmers of Iowa partnered on the study.