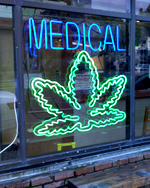 Republicans in the Iowa House have voted to make changes in the state-regulated medical marijuana program — changes the governor has said she’ll accept. Representative Jarad Klein of Keota was the Republican assigned to lead the debate.

The bill would limit patients to four-and-a-half grams of the chemical THC in the cannabis products they purchase over a 90-day period.
Representative Mary Gaskill, a Democrat from Ottumwa, said that’s not enough for many Iowa patients, including her daughter.

“To those who do not know what it is like to have a loved one suffering from the pain of MS, you have no idea how concerned I am tonight about reducing the allowed grams over 90 days,” Gaskill said.

Klein said the limit is based on the recommendation of the state board that oversees the program.

“I am not a physician. I never pretend to be, but I do listen to them on this topic,” Klein said, “because it’s very important for them to do the homework and report back to us their professional advice.”

Klein added that the bill provides a waiver if a doctor believes a patient would benefit from a higher amount of THC “to allow individuals to be treated on a case-to-case basis.”

Representative John Forbes, a Democrat from Urbandale, is a pharmacist who said most doctors are already reluctant to recommend cannabis products to their patients.

Representative Wes Breckenridge, a Democrat from Newton, said it’s unfair to patients currently in the system who’ve successfully switched from opioids to cannabis.

“Those that have finally found relief, have a dosage amount, a system in place where they are truly getting the care they need,” Breckenridge said, “now they’re going to have to try and jump back through hoops and hope, just hope that their practitioner will allow them and give them the dosage that they’re currently on.”

Other provisions in the bill would let patients get a doctor’s recommendation for medical marijuana as treatment for more conditions — for PTSD and autism as well as for patients with self-harming behavior.

Last year, Governor Reynolds surprised lawmakers by vetoing an expansion of the state’s medical marijuana program, but she’s made it clear she’ll sign this one. Key Senators still would like to allow patients to buy up a 90-day supply of cannabis products with up to 25 grams of THC. That means it’s unclear how this year’s medical marijuana debate may be resolved as it shifts to the senate.