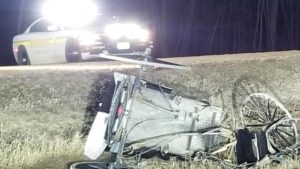 A Guttenburg man faces charges after this accident with a buggy.

The sheriff’s department says three people were seriously injured when a pickup driven by Alex Hyde struck the buggy. The injured were identified as 21-year-old Mary Miller, 21-year-old Adam Hershberger, and 17-year-old Nettie Hershberger, all of Edgewood. The horse died, but Hyde was not hurt.

Hyde faces charges that include: operating while intoxicated causing serious injury by vehicle, use of an electronic communication device while driving, driving on the wrong side of a two-way highway and carrying weapons while intoxicated.