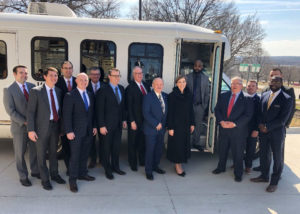 A ceremony on the statehouse steps has erased the final hurdle to a Waterloo barber’s dream.

“It’s the man of the hour!” Governor Kim Reynolds said to William Burt.

Reynolds then sat down at a table and signed a bill into law, so Burt’s mobile barber shop can take off.

“We’re here today because of the determination and the passion of William Burt,” Reynolds said. “He had a really good idea to serve his community, to bring his mobile barber shop to underserved people in the city of Waterloo, children of low-income households, veterans with disabilities or really anyone without access to a barber.”

State regulations had required barber shops to be in a fixed location. Burt discovered that impediment after turning a mini-bus into a mobile barber shop, so he began lobbying legislators to make that change.

“It’s definitely an exciting moment,” Burt told reporters. “I’m happy that we can go to work now in the state of Iowa. We are mobile.”

The bill got unanimous support from the House and the Senate this year. One lawmaker yelled, “make a million dollars!” as a group gathered for the bill signing cheered. 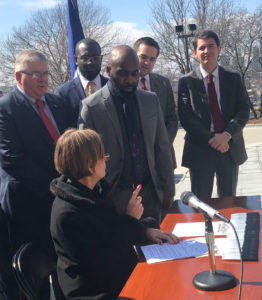 “Keep telling your story,” Reynolds said. “That’s an important piece of this.”

The governor has praised Burt for turning his life around. After being in prison, he got an undergrad and graduate degree from the University of Northern Iowa and is a business owner. Representative Ras Smith of Waterloo said Burt’s story is a beacon to others.

“If you try hard, if you work through, no matter what barriers are put in front of you, you can still achieve something that’s great,” Smith said.

Smith, one of the lawmakers who guided the bill through the legislature, said this is just the beginning for Burt.

“I know he’s not going to wrap himself up in the personal accolades, but I will shower the praise because I think it’s important to understand somebody who just over 10 years ago was incarcerated…and is here, right outside the capitol,” Smith said. “Come on, brother, that speaks more than any words on paper can ever, ever do for our community.”

Senator Dan Zumbach of Ryan guided the bill through the Senate after hearing about Burt’s predicament.

“This gentleman needs to be able to do what he wants to do and government’s in his way. I’m an agriculture guy and I don’t know anything about the haircutting business, but I know you do and I was in a position to help you out and that’s why we ran with it,” Zumbach said.

Burt replied: “Man, you guys are going to make me cry. Thank you again.”

Zumbach also signed up to get the first haircut in the mobile barber shop, as it was parked outside the capitol.