You are here: Home / Crime / Courts / Officer and dog heading back to Manchester after pay increase 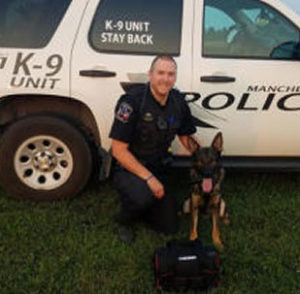 Two northeast Iowa communities are playing tug-of-war in the recruitment and retention of police officers.

Dyersville recently lured away two police officers from Manchester, including the town’s only trained K-9 officer and his dog. Now, Manchester Police Chief Jim Hauschild says his town’s leaders have upped the ante.

“Dyersville offered some fairly large pay increases which forced us to take a look at our package and what we’re doing to retain officers,” Chief Hauschild says. “I met with the personnel committee and they decided that we needed to be competitive and made a few changes in our pay for officers as well as a couple of other benefits.”

Monday night, the Manchester City Council approved a pay hike of $3.75 an hour for police officers. Officer David Trumblee and his dog Ace, will return to Manchester next week, after Trumblee resigned in February to move to Dyersville. Hauschild says all of the comments he’s heard or seen on social media indicate Manchester residents are “ecstatic” to see the team return.

“They’re an important part of our drug enforcement program and in our community policing program,” Hauschild says. “Ace is a very approachable dog, he loves to be petted, and Dave’s good with people, too. We’re very fortunate to have a team that not only does what they need to do as far as drug enforcement, or tracking people or finding lost articles, whatever we may ask the dog to do, but people like them as well and that’s an important part of it.”

When Trumblee resigned, he agreed to pay the town $10,000 to keep Ace as a family pet. It left Manchester without a police dog for the first time in 20 years.