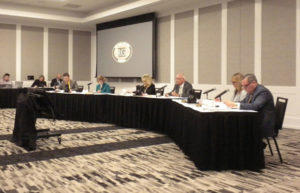 State-licensed casinos in Northwood, Sioux City, and Altoona were issued fines Tuesday by the Iowa Racing and Gaming Commission for violations related to customers who had banned themselves from betting.

The Diamond Jo Casino in Worth County near Northwood was fined $5,000 after a person who had banned themselves from gambling was sent promotional materials. General Manager Scott Smith says the error happened because the person had two accounts in the system.

“We deeply regret that this did happen. We do take it very, very seriously,” Smith says. “And through this, we found really a flaw within our system itself. And through property compliance, our team there quickly corrected the issue that we had.” He says they believe they have corrected the problem.

“Since that time we’ve upgraded our casino management systems now where that type of thing doesn’t happen anymore where a duplicate account has to be created — which allowed just for human error within this. It’s very unfortunate, we took action right away with that one mailing,” Smith says.

The Hard Rock Casino in Sioux City was also fined $5,000 for taking 8 days to upload new additions to the self-ban list as the state requires them to be loaded within 7 days. Hard Rock general manager Doug Fisher says it was unfortunate that this happened. “This is nothing more than procedures not being followed,” Smith says. “So once we were notified of this we immediately revamped our procedures and to where we are now uploading every two to three days to avoid any type of these infractions moving forward.”

Smith says they hope the changes will keep this from happening again. “We’re quite frankly very embarrassed to be up here. I believe this is the first time that we have had any type of these offenses for our property,” Smith says. The fine was $5,000 because it was the only violation in the last 365 days.

Prairie Meadows Casino in Altoona was fined $10,000 for a set self-ban violations. Part of the fine was for failing to upload new people on the banned list in the required seven-day period. Prairie Meadows director of Security, Jake Hedgecock, says it was an employee error.

“The employee in question had been disciplined and retrained accordingly. Also, we incorporated a new policy that each shift manager will do an upload and download each day — so that we will never be in front of you again talking about this violation,” Hedgcock says. The second Prairie Meadows violation was a little more complicated. A person had signed up for a self-ban back in 2012 and then asked the Racing and Gaming Commission to take him off the banned list under a new rule that allows someone to reconsider a self-ban after five years. The Commission did not show the man on the list — and it was determined that Prairie Meadows never loaded the man’s name into the system back in 2012.

Hedgcock says it is hard to fully determine what happened as the database had been updated and revised through the years.
“So, when Prairie Meadows went back to review its information — our record show that we did everything correctly — but we truly don’t know because of the database not being around,” according to Hedgecock. “What I can tell you though is that Prairie Meadows is one of the first establishments that implement the self-exclusion platform in 1996, and we have never had a violation of this nature.”

Violations of the self-ban rules start at $5,000 and can be as high as $20,000 depending on the number of violations in a calendar year.