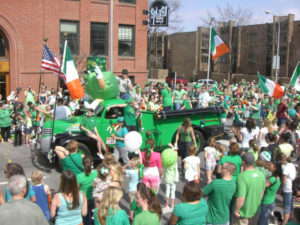 A past St. Patrick’s Day parade in Des Moines.

While St. Patrick’s Day parades are being canceled in many cities due to fears about the coronavirus, at least two of Iowa’s biggest Irish gatherings are still on.

Des Moines’ St. Pat’s Day parade is scheduled for next Tuesday at noon, while Emmetsburg’s festivities have been underway all this week. Brent Mehan, with the St. Patrick’s Association of Emmetsburg, says no virus will rain on their parade.

“As of now, we’re just kind of trying to keep an eye on it but everything’s just going to be business as normal,” Mehan says. Emmetsburg opened its eight-day St. Patrick’s celebration this past Sunday with the Little Miss Shamrock Pageant and the events will continue through the coming weekend.

Mehan says everything is being well attended, as usual, and the crowds seem oblivious to the outbreak. “I’m sure there might be a few less, but it’s one of those things where we’ve gotta’ play the card we’re dealt,” he says. This year’s parade in Emmetsburg will feature 175 entries, and the guest of honor is Joan Freeman, a senator in the Irish legislature.

“The parade is on Saturday afternoon at 1:30 and we’ll have bagpipers and the little go-cart guys, a couple of different bands, just a lot of good entertainment,” Mehan says. Other events include a fish fry, a bean bag tournament, the “O’Round the Loch Scholarship Run,” and an Irish genealogy workshop.

“We’ve got the Kids’ Zone, there are all sorts of games and stuff for kids to do,” Mehan says, “and we’ve got the Gathering of the Clans at the fire department, that’s a big draw where everyone can come and get together.”

The nation’s only bi-state St. Patrick’s Day Parade has been canceled after county health officials requested it not proceed. That 35th annual parade was scheduled to run between Rock Island, Illinois, and Davenport, Iowa on Saturday. St. Pat’s parades have also been canceled in Kansas City, Chicago, St. Louis — and in Dublin, Ireland.