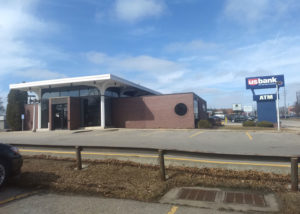 UPDATE:
The name of the man who died from gunshot wounds in Wednesday’s attempted armor car robbery has been released. Waterloo police have identified the man as 37-year-old Bryce Miller of rural La Porte City.

The suspect who was shot during the attempted robbery of an armored truck outside a Waterloo bank Wednesday morning has died — and a second suspect is in custody.

Waterloo police confirmed the suspect’s death in a press release Wednesday evening. Authorities say the man died at a local hospital after he was shot by security guards outside a U.S. Bank branch on Kimball Avenue. Police did not immediately identify the dead man.

Police say a second man, who fled the scene in a getaway car, was later apprehended outside a convenience store on the other side of the city. Police took 28-year-old Rogelio Gonzalez into custody on a charge of first-degree robbery.

The incident began around 9:45 a.m. Wednesday, when police responded to a report of shots fired at U.S. Bank. When officers arrived, they found the man who later died from gunshot wounds