You are here: Home / News / Corps has spent $315 million on Missouri levee repairs 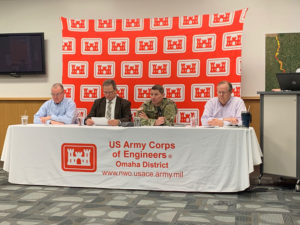 The U.S. Army Corps of Engineers has closed 34 breaches on five separate levee systems along the Missouri River that were damaged by last year’s massive flooding.

“This winter was relatively mild,” says Ted Streckfuss, deputy district engineer for the Corps’ Omaha District. “That allowed us to work long hours…as a result of that, we’ve been successful in reaching one of our goals which was being able to close by the 1 March timeline.”

In addition to closing breaches, Omaha District Commander Colonel John Hudson says the Corps has returned the damaged levees to their pre-flood heights — but there’s a need to get grass seeded on top to help hold repaired sections in place.

“Even though it’s at full height, it remains vulnerable,” he says. “If we have extended periods of time with water on those levees without well-established grass, there’s increased risk. In addition, these levees haven’t been fully loaded with water, so there’s always risk.”

The Corps has secured more than $400 million to fix the levees that were damaged by last year’s flooding. Colonel John Hudson says the funding has been sufficient so far.

“While we still believe we’ll need a few hundred million more than that before it’s done, at this point we have received all the funding we have needed for all of the contracts that we have either awarded or currently plan to award,” he says.

Corps officials say they still have some work to do to fully restore the levee systems. The Corps is also working with Iowa and three other Missouri River states on flood risk management studies.