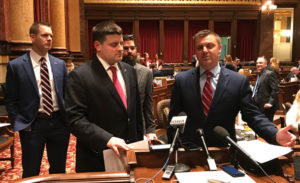 The Iowa Legislature has suspended its 2020 session for at least 30 days and given Governor Kim Reynolds new authority to use nearly $20 million from the state’s Economic Emergency Fund to respond to the COVID-19 outbreak.

“We also think it’s prudent at this time to pause our normal legislative business so that the governor, legislators and government employees can focus exclusively on the coronavirus outbreak,” Whitver said.

In addition, lawmakers voted to lift all limits and let the governor shift money around within the current state budget, if needed.

“We’ll give the governor the authority to do what she needs to do while we’re not in session to make sure that there’s confidence that government will function appropriately at this time,” Whitver said.

As an added precaution, the plan sets aside enough money to keep state government operating until September 1st, two months into the next state fiscal year.

“Hopefully, we can be back as soon as possible,” said House Speaker Pat Grassley, a Republican from New Hartford. “If not, we need to be prepared and making responsible decisions so that the government will continue to operate.”

Republicans and Democrats unanimously voted for these moves.

“We all can agree that we need to give the governor the powers to take decisive action,” said House Minority Leader Todd Prichard, a Democrat from Charles City.

If the governor decides more than $20 million is needed from the Economic Emergency Fund, Grassley indicated the 20-member Legislative Council made up of leaders will convene to approve that withdrawal.

“We made sure that the legislature was still involved as much as we could be without bringing everyone back into the building,” Grassley said.

Senate Minority Leader Janet Petersen, a Democrat from Des Moines, said the Legislative Council could also decide to reconvene the full legislature earlier, but she’s hoping lawmakers stay out of the Capitol for at least 30 days.

“Setting a good example for Iowans by not gathering in a germ-infested building like this one,” Petersen said, “and making sure that we’re abiding by a quarantine as well.”

Part of the plan means schools do not have to make up missed days that occur between now and April 12, but some districts may accumulate more than that. Petersen has a son who’s scheduled to graduate this spring, but that timing could be in doubt in his district and in others, depending on how many days are missed

“The state wants to do what’s in the best interest of families,” Petersen said. “…Safety first and health first.”

Pay for teachers and other school staff is determined by local district officials, but advocates say it’s unlikely districts will withhold pay over the next month since school budgets aren’t being cut.

The legislature convened early Monday afternoon. Following hours of private negotiations and meetings, senators began voting on the plan at about 10 p.m. The House ended the legislature’s marathon day at 12:13 a.m  on Tuesday.

“Be well. God bless,” House Majority Leader Matt Windschitl, a Republican from Missouri Valley, said to his colleagues in conclusion.