You are here: Home / News / It’s not a normal Tuesday, March 17 at Iowa Capitol 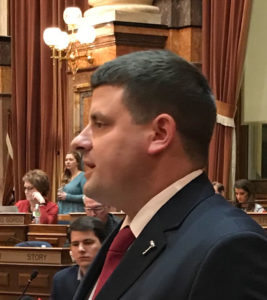 At the Iowa Capitol, it is not business as usual for a Tuesday in the month of March. The legislature is not in session — for at least 30 days — after giving the governor new spending authority to deal with the COVID-19 outbreak.

House Majority Leader Matt Windschitl made this announcement at about 12:15 a.m. today.

“Ladies and gentlemen of the House, that concludes floor action for the time being,” Windschitl said. “All I’ll say is be well, take care and God bless. Mr. Speaker, I move that the House adjourn until a time that is appropriate for the House to reconvene.”

In a signal these are not normal times, House Speaker Pat Grassley stepped out of the speaker’s chair shortly before midnight and onto the House floor to speak about the plan.

“Briefly, and I know the time is late, I want to thank all of you for your patience working through these circumstances we’ve been under the last 24 hours,” Grassley said.

A rare parliamentary procedure was used to speed approval of the plan in the Iowa Senate late last night, then Majority Leader Jack Whitver, a Republican from Ankeny, also took the unusual step of personally leading debate of the plan in the senate. Whitver offered parting advice to his colleagues.

“(I) encourage people to work from home on bills, on budget, working with their constituents,” Whitver said. “When we come back, we’ll be ready to work.”

The current plan is to restart the 2020 legislative session on April 15th. House Minority Leader Todd Prichard of Charles City noted Democrats and Republicans voted unanimously to make these decisions.

“Today’s actions mark a significant event in the history of this House of Representatives,” Prichard said shortly after midnight. “…I’m convinced that bold action is needed to protect the state from the coronavirus.”

Governor Reynolds is expected to sign the plan, but has not announced when she will take action. The legislation — in the form of paper documents — has to be routed through normal channels and that cannot be done automatically.

The final vote in the Senate on the plan was 36-0,  as 14 of the 50 senators were not at the capitol late last night and formally excused from voting. The tally in the House was 93-0.