You are here: Home / News / Severe weather with rain and snow in the forecast as we hit spring 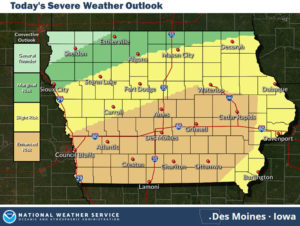 Forecasters warn severe weather is possible this afternoon for much of central and southern Iowa.

It’s the first day of spring but up to 2 inches of snow is likely for northwest Iowa by tonight as a strong storm system arrives. Meteorologist Chad Hahn, at the National Weather Service in metro Des Moines, says 16 counties in northwest Iowa are under a Winter Weather Advisory this evening and into tomorrow.

“They’ll get a pretty good shot of precipitation in the form of rain today and as the cold air filters in tonight behind the cold front, that’ll transition over to snow,” Hahn says. “We’ll see some light accumulations and potential travel impacts across northwestern and northern Iowa tonight.”

While many Iowans are already thinking of their spring planting plans, some will have to haul out their snow shovels on Friday.
“We have about an inch to an inch-and-a-half in the forecast in north-central Iowa, maybe upwards of two inches or so up in the northwestern part of the state,” Hahn says. “I don’t want to focus so much on the amounts as the combination with the northwest winds at 40 miles per hour and even two inches of snow can create some travel headaches.”

Parts of southern Iowa may reach 70 degrees this afternoon. The normal high temperature for Des Moines for today’s date is an even 50 degrees, so wide swings are in the making.

“As we approach the mid-60s today, obviously, we’ll be about ten or 15 degrees above that,” Hahn says. “As we go through today and behind the cold front tomorrow, high temperatures here in central Iowa will be in the mid-30s so, a change of about 30 degrees and, of course, that’ll be about 15 degrees below what the seasonal temperatures are for this time of year.”

Forecasts call for highs back around normal in the 40s and 50s by Monday and into next week.