You are here: Home / Business / Home sales in the state were up in February 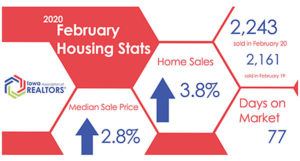 The latest numbers from the Iowa Association of Realtors show home sales in the were up again in February.

Association president-elect Jen Burkamper of Ames says sales increased by 3.8% and pending home sales were 16.4% higher compared to last February. Everybody’s been excited for the spring market. January and February both were very good for sales,” Burkamper says.

She says the only thing holding them back is finding enough houses to sell. “That is what we’ve been seeing, we don’t have enough supply, there’s more demand than supply, and that’s been the case for several years now,” according to Burkamper. “In central Iowa especially, we’ve just been struggling with inventory and getting inventory.”

The median sales price of homes was 2.8% higher compared to February of last year at $155,000. Burkamper says the lack of available homes gives an advantage to sellers. “It’s not uncommon to see several multiple offer type situations, it just depends on what price range you are in. We just don’t have enough inventory in any of the price ranges really to supply the demand,” Burkamper says.

She says Realtors have noticed some slowdown in the last week as the coronavirus became more prevalent. There are still people out looking for houses. “It’s just the people that have to move right now — they’re still out there in the market — and we still have sellers putting their homes on the market,” Burkamper says. “I think everybody is just so uncertain as to just what effect this is going to have on the market.”

She says the cut in interest rates didn’t have the impact on housing it might have in other areas of the economy. “Well, the mortgage industry had already predicted a decrease….we saw a decrease in the rates about two weeks ago, and then last week we saw an increase in the rates. So, they are down to historical lows,” she says.

Burkamper says things start to ramp up this time of year — especially in areas where there is a big rental population. “Our rental market really goes from August one to July 31st. And people have to start deciding in February and March if they are going to renew their leases in the next cycle. So, that is what precipitates a lot of that activity,” Burkamper says.

And she says people who are planning on moving usually wait until school is out in May and they see an uptick in people buying and selling their homes. Homes sold in February were on the market for an average of 77 days which is slightly up from 74 days in February 2019.