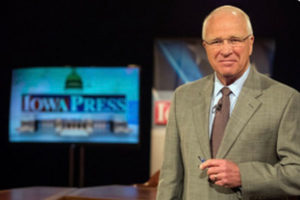 A long-time, well-known Iowa journalist has died. Dean Borg was host and moderator of the weekly “Iowa Press” program on Iowa PBS for more than four decades.

“There’s no better place to cover politics than Iowa,” Borg said during a  retrospective that aired on Iowa PBS just over three years ago.

Radio Iowa news director O. Kay Henderson has shared these memories of Borg with Iowa Public Radio, where Borg did part-time work for the past two decades.

“I would describe Dean in two parts. There’s the personal part — a true gentleman, a good friend, and a devoted family man. Then, there’s the professional part — the tenacious, determined journalist and I think that explains his popularity with the ‘Iowa Press’ audience,” Henderson said. “I think they could see and sense all of that.”

Borg grew up in Forest City and was the first member of his family to attend college. He graduated from Iowa State University with a degree in journalism, served in the Air Force, worked for the Defense Department and was a war correspondent in Vietnam. Borg returned to Iowa to work at WMT television in Cedar Rapids. He helped launch “Iowa Press” on public television in 1971 and retired as the program’s host in 2017.

Borg, who was 81, died of complications from pancreatic cancer.

Borg and his wife, Sheila, have been long-time residents of Mount Vernon. Borg is survived by his wife. five children and nine grandchildren.