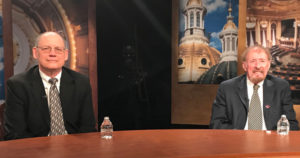 Peter Orazem of ISU and Ernie Goss of Creighton.

Sending $1,200 checks to most every American is part of the stimulus package Congress has devised and Creighton University economist Ernie Goss says those checks will help the overall economy.

“It’s a good idea in the sense of stimulating demand and that’s what we’re talking about here,” Goss says. “…Ultimately, it we will get a spring back in the economy and that would be part of it.”

Goss does have concerns about the ballooning federal deficit, but he is predicting the U.S. economy will bounce back once the coronavirus-caused closures are lifted. Iowa State University economist Peter Orazem says given economic conditions, policymakers should have been reducing the deficit over the past few years.

“But once you get to this particular state where a bunch of firms and a lot of people do not have savings to withstand that problem, I think doing some sort of government transfer payment program to try to help out the population is a very good idea,” Orazem says.

According to Orazem, about 22% of the jobs in Iowa are in the service sector — in restaurants, bars, and other hospitality industry businesses.

“A lot of firms that are mom-and-pop establishments,” Orazem says. “It’s hard for them to get by with one or two months of no revenue.”

Orazem says some other sectors of the economy can easily shift to a work-from-home format and keep people employed. Goss, from Creighton, regularly surveys rural bank managers in the Midwest. He compared the most recent results with surveys taken during the Great Recession in 2008 and 2009.

Goss says the current economic disruption will have some positive, long-term consequences.

“For example, universities are going to begin offering more and more online,” Goss says. “We’ll become cost-effective, which we need to do”

And Goss says a shift to online instruction is likely to help rural K-through-12 school districts that are financially-strapped and sparsely-populated.

The two economists made their comments on the “Iowa Press” program on Iowa PBS.