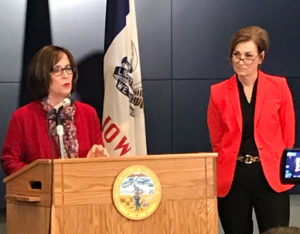 IWD Director Beth Townsend and Gov. Reynolds during the briefing.

Governor Kim Reynolds says it appears city and county officials in Iowa do not have the authority to issue local “shelter in place” orders.

Linn County officials have been discussing the move and Iowa City’s mayor has asked the governor to issue either a statewide or regional “stay home” order. Iowa City is in Johnson County, the epicenter of the COVID outbreak in Iowa, where 49 cases of the virus have been confirmed. The governor today said she’s asked officials in Johnson and Linn Counties to consider all the angles.

“Like the social distancing and some of the policies that we’ve put in place — Are we communicating those in a manner that we should? Are there additional measures that should be taken?” Reynolds said during her daily news conference. “We need to look at the (personal protective equipment) and the workforce capacity and how that is impacted in what we’re doing.”

Iowa City’s mayor has declared a civil emergency in his community. Reynolds indicated her staff consulted the attorney general and determined cities and counties do not have the authority to order citizens to stay at home.

“We’re reaching to communities on a daily level to walk through the metrics that we’re using,” Reynolds said, “to talk them through why we don’t think it’s necessary to issue a ‘shelter in place’ at this point.”

Reynolds has expanded the list of businesses that must close to include flower shops, furniture stores and retailers that sell shoes and clothes. Her closure order does not apply to grocery stores, pharmacies and discount stores that sell clothing, furniture and flowers as well as groceries, toilet paper, and other daily necessities.