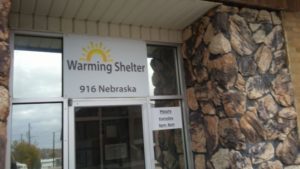 Sioux City’s homeless shelter has closed one month earlier than normal. Warming Shelter director Lindsay Landrum says board members made the difficult decision to close the shelter doors Wednesday for the season.

Landrum says their were concerns about the health of those staying at the shelter, as well as her staff. Around 30 people were standing on the streets around the shelter after they were told the building was closing — including this man. “This morning they just closed it down because they said someone had a high fever…so the closed down the warming shelter for the rest of the season, so a lot of us don’t have anywhere to go,” he says.

Landrum says some of the people staying there have been ill, but anyone coming in to stay was screened. “And what that screening process was, was taking their temperature and asking them some questions. And we did have a couple of people with a high fever — and they came back with a strep throat diagnoses. So, it wasn’t the virus at all,” Landrum says.

Landrum says she’s working with the city to find some housing and hotel vouchers for the homeless population. The shelter will continue to take donations for next season and also for the renovation of the building to expand their services.