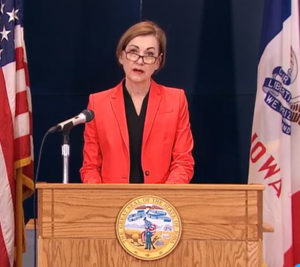 State officials have confirmed there’s an outbreak of COVID-19 at a Cedar Rapids nursing home. Governor Kim Reynolds made the announcement during her daily news conference.

“Twenty-one of Linn County’s 71 total positive COVID-19 cases are directly related to this outbreak,” Reynolds said. “State and local public health officials are working closely with the facility regarding the care of those who are sick and assisting with the monitoring of residents and staff.”

Last week, Reynolds issued an order that all staff entering any long-term care facility in the state be screened for a fever, as that’s one of the key symptoms of COVID-19.

“This is a critical step to ensure our health care workers are healthy,” Reynolds said today, “and to protect the most vulnerable Iowans.”

Some city and county officials in the state have been asking the governor to take another step and issue a statewide “stay at home” order. Reynolds today said the data does not indicate that kind of a restriction should be triggered at this point.

“I really feel strongly that’s the proper way to move forward so that we don’t really impact the supply chain,” Reynolds said, “we don’t raise the anxiety higher than it already is.”

Reynolds said health care experts advise there’s a chance for a second spike in the number of COVID-19 cases, perhaps in the fall, and that’s why she’s not issuing a “stay at home” order now.

“This is a marathon and so if you keep asking people to do more and more and more and we’re not basing it on data, then at some point they really are not going to take you serious,” Reynolds said. “It’s like: ‘Well, we’ve asked too much of people and their willingness to accept and do what they need to do is really pushed to the max.”

According to Reynolds, the state of Iowa will receive at least 15 of the new mobile testing machines from Abbott Laboratories that will be able to process tests in five minutes. Reynolds suggested those machines will be deployed to hospitals and some nursing homes.

Reynolds told reporters she’s waiting for the Trump Administration to release details later this week on the president’s “social distancing” guidelines which have been extended until April 30th. As of now, the governor has only recommended that Iowa schools stay closed until Monday, April 13th.