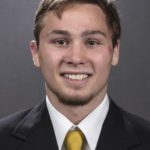 Iowa junior Spencer Lee has been named winner of the 2020 WIN Magazine/Culture House Dan Hodge Trophy, presented annually to the nation’s most dominant college wrestler. He earned 51 of a possible 56 first-place votes.

“Winning the Hodge Trophy and being recognized by fans, past winners, and members of the media is certainly an honor,” Lee said. “The criteria behind the trophy is in line with the values of the Iowa Wrestling program, and I want to thank my teammates, coaches, and fans for their endless support. I also want to congratulate the other finalists. No one got the end they wanted, but this is still a season we should all be proud of.”

Lee was 18-0 overall, won his first conference title, and was named Big Ten Wrestler of the Year. Only four of his 18 matches went the entire seven minutes. Lee was 5-0 in the month of January with five technical falls. He outscored those five opponents 84-1.

“This is a unique Hodge Trophy because of the lopsided point differential. When you talk about 234 points to 18, that has got to be unprecedented,” said Iowa head coach Tom Brands. “When you look at a guy who can dominate by taking you down and letting you up and taking you down; that is one thing. But to get on top of a guy and score 17 straight points in 2 1/2 minutes, that is a whole different animal and tell-tale of dominance. Give Spencer Lee full credit.”

Lee is the third Hawkeye in program history to win the award since its inception in 1995. Mark Ironside was honored in 1998, and Brent Metcalf earned the award in 2008. Ironside and Metcalf were both NCAA champions. Lee was the top-seed at 125 pounds and going for his third straight national title before the 2020 NCAA Championships were called off March 12 due to the COVID-19 pandemic.