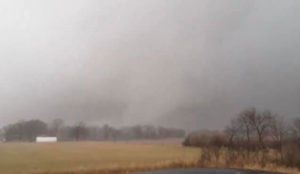 The twister destroyed a rural Black Hawk County farm, just south of Waterloo. A survey team rated the tornado an EF-0, with winds around 85 miles-an-hour. The tornado touched down at 5:49 p.m. and was on the ground for only two minutes.

There were multiple reports of tornadoes, funnel clouds, hail and high wind as severe thunderstorms rolled across the state Saturday.

National Weather Service officials say an EF-1 tornado — with winds estimated at 107 miles per hour – uprooted trees and struck a 12-unit apartment complex on the northwest edge of Oelwein, tearing part of a wall off one building and the siding off another.

In Dubuque County, a confirmed tornado damaged at least six farms near Sherrill, and a possible twister in Black Hawk County destroyed some buildings on a farm just south of Waterloo. There were no reports of injuries associated with the storms.
A team from the National Weather Service is expected to survey the damage in Black Hawk County today.