You are here: Home / News / Lieutenant Governor leading push to get Census forms filled out 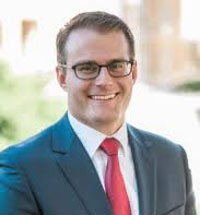 This is Census Day and Iowans are urged to fill out their forms online, by phone or through the mail, with all answers based on where they’re living today, April 1st.

Iowa Lieutenant Governor Adam Gregg is chairman of the Iowa Census Complete Count Committee. Responses are vital from every Iowa household, Gregg says, as those numbers will determine the size of Iowa’s slices from multiple federal pies over the next decade.

“There’s an estimated $675 billion that are distributed all across the country,” Gregg says. “A George Washington University study found Iowa has over $8.7 billion at stake in the census through 55 different programs which consider population as part of their distribution formula.”

The census figures determine Iowa’s representation in Congress, but also the size of the state legislature as well as local city councils, county commissions, school boards and more. Gregg notes the census also impacts the response to issues like the coronavirus pandemic. 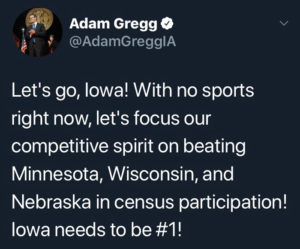 “In the federal CARES Act that was just passed, there were trillions of dollars distributed into our economy and there were hundreds of billions of dollars that went to the states in the form of grants,” Gregg says. “That formula was driven by population which, of course, is driven by responses from the 2010 Census.” Another report says the census determines more than 17-thousand dollars — per Iowan — over ten years, so even a one-percent variation can mean a significant amount of money. Given how such an array of Iowans is staying in during the COVID-19 outbreak, Gregg says this is an ideal opportunity to fulfill your civic duty and visit the website: www.my2020census.gov.

“Many people are at home so it makes it very easy to go out there, take the five minutes it’s going to take to fill out your census online,” Gregg says. “It’s also really important, too, because the Census Bureau doesn’t have to send somebody to your door if you’ve already filled it out online or responded by phone.”

So far, about 42% of Iowans have filled out their forms. Last week, Iowa was second in the nation in terms of our census response rate, but Gregg says we’ve slipped a bit to several of our neighbors. “In 2000, we were number-two overall, in 2010, we were number-three. We need to get back to number-one,” Gregg says. “Right now, the most recent numbers I’ve seen, we are actually at number-four and we’re narrowly behind Minnesota, Wisconsin and Nebraska.”

If we can’t beat ’em in any sports arenas, with all activities canceled, Gregg says Iowans at least need to step up and respond to thrash our rivals — in the census.