You are here: Home / News / March was a little wetter and warmer than average 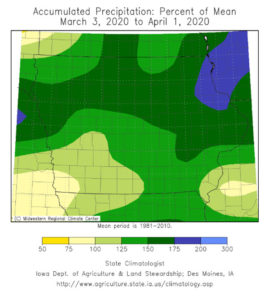 March wrapped up being wetter than average across most of Iowa, according to state climatologist Justin Glisan.

“Only sections of southwest Iowa were below average for precipitation,” Glisan says. “If we look at the statewide average, we were at about three inches of precipitation, rainfall and snow, and that’s about eight-tenths of an inch above average.” Specifically for snowfall, Iowa was below-normal for March. We typically get almost five inches of snow during the month, but only had a statewide average of about two inches.

In addition to being wetter-than-usual, Glisan says March was also warmer than the norm.  “If we look at the statewide temperature for March,” Glisan says, “we were almost four degrees above average and that was pretty uniform across the Midwest as well.” Iowa’s average temperature was in the mid-30s for March.

Glisan says the forecast models for April indicate the wetter, warmer pattern will continue.  “We have a signal for much of the Midwest of above-average probabilities of being warmer than normal,” Glisan says. “Typically when you see warmer temperatures, there’s a wetter signal also to that. If we look at precipitation chances, our probabilities are slightly elevated for wetter-than-normal conditions.”

While we’re two weeks into spring, a Winter Weather advisory is posted for a wide section of northwestern, north-central and western Iowa. Forecasters say rain will change to freezing rain tonight and into tomorrow across the region.