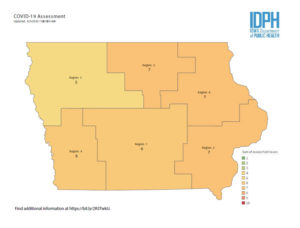 State public health officials have drawn up a map that divides the state into six sections. They’re tracking COVID-19 developments in each area.

The Iowa Press Citizen obtained the point system being used to determine if or when Governor Reynolds issues a shelter-in-place order. Dr. Caitlin Pedati, the State Medical Director, said a key factor they’re following is the number of outbreaks in nursing homes.

“It’s important to keep that in mind because we’ve seen the experiences of other countries and other states,” Pedati said Thursday during the governor’s daily news conference, “and how challenging it can be to care for those populations in those situations.”

Earlier this week, state officials revealed there is an outbreak at a nursing home in Cedar Rapids, but on Thursday they have declined to reveal whether there are outbreaks at other facilities. Other factors state officials are tracking are the percentage of people in each part of the state who’re over the age of 65 and the percentage of Iowans in each of the six zones who’ve been hospitalized for treatment of COVID-19. Governor Kim Reynolds said the analysis helps deploy resources.

“We can identify where some of the hotspots (are at. Is it in a region?” Reynolds asked. “So we can focus in and make sure that we are getting the equipment there, we have a workforce, we have the surge capacity in place — so that we don’t overwhelm some of our hospital systems.”

State officials released the map showing these ratings to the public shortly before the governor’s news conference. It appears to divide the state based on which major hospitals would treat seriously ill patients in each region.

“As we learn more and we take a look at other assumptions and data that’s available, we’ll continue to monitor the situation,” Reynolds said.

The map shows segments of eastern Iowa with a score of 7 out of 10. A score of 10 would trigger a shelter-in-place order from the governor. Reynolds said earlier this week she might issue such an order for a region rather than for the entire state.