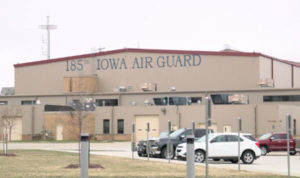 Iowa National Guard soldiers and airmen stationed in northwest Iowa are joining forces to be ready to respond to the coronavirus pandemic.

“The other two task forces are strictly Army headquarters,” Parrino says. “This is the only joint task force in Iowa currently where Air and Army are working together to become a staff to execute the same operational settings and missioning that the rest of the state is.”

The joint operations center in Sioux City will provide planning, logistics and coordination support to COVID-19 response efforts in western Iowa. Parrino says it will also facilitate a faster response capability, as needed. “So far, the typical missions that we’ve seen, they have been providing tents, taking a look at planning, regional planning for medical facilities and where we may have some expertise and some assets that can help them be better prepared,” he says.

Parrino says there are certain types of military vehicles that are available for deployment where necessary. “We have field ambulances that we could leverage if we needed to,” Parrino says. “Currently, they’re not necessarily getting tasked at this point. It’s pretty much just getting ready if we were needed.”

Soldiers from other units have delivered more than 280 pallets of urgently-needed medical supplies to more than 90 of Iowa’s 99 counties. Similar Iowa National Guard operations centers are now active at Camp Dodge in Johnston and in Iowa City.