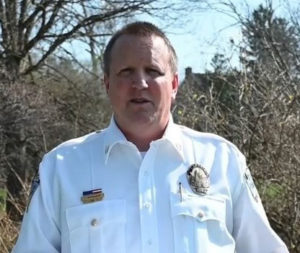 In a video posted Tuesday night on the Clinton Police Department Facebook page, Captain Joe Raaymakers discussed his experience along with a plea for Iowans to stay home.

Raaymakers said he first noticed the symptoms on March 20th and tested positive March 29th, but he doesn’t know where or how he caught coronavirus. “I hadn’t been around anyone really and there were no cases in Clinton County so ‘denial’ was my first thought but then the illness hit,” Raaymakers says. “The illness was devastating the first couple of weeks, like the worst flu I’ve ever had, the worst flu I can remember as an adult for two solid weeks.”

The police officer is 53 and says he was in relatively good health before the virus hit. The fever and body aches were the worst he’s felt, followed by fatigue and the debilitating shortness of breath.  “Even just sitting in bed or watching TV, I would be short of breath and have to gasp for breath,” he says, “and if I did get up and get dressed, just the act of putting on my socks was like running a sprint and would require some recovery time just from putting on my socks.”

That being short of breath was the scariest part, he says, as it makes you question whether you’ll survive. “Going into the virus moderately healthy, I can’t imagine how it would affect our older community or the community that already has respiratory problems,” Raaymakers says. “I can easily see how this could hospitalize or cause the death of someone, just because it’s so hard to breathe.”

Raaymakers says the Facebook video is not about him — it’s about following the guidelines to be safe and he’s urging people to shelter in place. “The biggest thing that I could ask for is just to stay at home and not have the ability to pass this on, if you were to contract it,” he says. “It’s as bad as you see on the news and I want to put a face to that so you can see that just an everyday guy can get it and it was devastating.”

The video was posted to the Clinton Police Department Facebook page on Tuesday evening and after just 12 hours online, it was shared nearly 500 times.