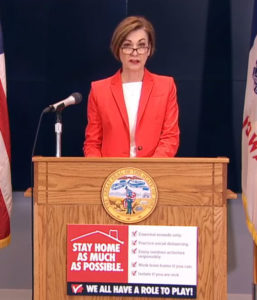 “Actually the commandant has been very pro-active in educating the staff and the facility based on the Department of Public Health guidelines,” Reynolds says.

The first staff member who tested positive on March 26th had no contact with residents, according to the governor. The second Veterans Home staffer who’ve tested positive was involved in patient care and their last day of work inside the home was March 17th.

A third employee who last worked inside the home on March 29th has tested positive for the virus and the governor says COVID-19 tests are pending for three other staff members.

“Anybody that has tested positive and anybody that they’ve come in contact with they are testing outside the facility with a drive-up test,” Reynolds says, “and they are keeping them isolated until they get the test back to find out whether they’re positive or negative.”

“Also all direct care staff are expected to wear surgical masks and face shields at all times when they’re dealing with the residents,” Reynolds says, “and the non-direct care providers are required to wear homemade masks and if they would like a shield, those are being provided as well.”

All of the home’s employees are being screened at the beginning and end of each shift for fever and breathing problems.

(Ken Huge of KFJB in Marshalltown contributed to this story)