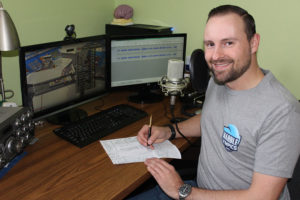 The COVID-19 pandemic is leaving sports fans everywhere hungry for something — anything — to watch and millions are turning to the sport of marble racing, with an Iowan calling all the action.

The fast-moving and faster-growing international phenomenon of marble racing has Dutch roots. In one style of competition, the colored glass globes roll down a long, twisting trench dug in the sand by two brothers in the Netherlands. Greg Woods, of Fort Dodge, is the play-by-play man for the quirky sport that suddenly has a worldwide following thanks to a series of — pardon the V-word — viral videos.

“It’s literally a sandhill over in the Netherlands and they’ve carved out this serpentine trench going down it and then they release marbles at the top and follow them to the bottom,” Woods says, “but the marbles have names and it turns into this sense of competition over the course of it, that they are racing to get to the bottom.”

The marbles can also be seen being pulled by gravity around an elaborate Formula One-style plastic track — or in a host of “Marble-lympics” events, complete with cheering, color-coordinated marble crowds in tiny grandstands. Woods says he’s stunned by how popular the YouTube videos have become in the few weeks since coronavirus closed down virtually all other sports around the planet.

Woods is a fan of the real Formula One racing and has experience calling high school and college sporting events on the radio in central Iowa. While marble racing could be mistaken for child’s play, Woods says he endeavors to call the races as professionally as possible, which adds to the authenticity and excitement for viewers.

“It’s a testament to the world that Jelle and his brother, Dion, have created in these videos,” Woods says. “It makes it really easy to suspend that disbelief and to fall into this world. It still has the same sort of challenge that any live sport does, so you get into it pretty quickly.” Woods, a Newton native, has a master’s degree in public health from the University of Iowa and works as a program specialist for the Iowa chapter of the Alzheimer’s Association.

The marble racing events provide a welcome, comforting respite for Woods and for the growing, global audience of fans.

“I have gotten a lot of notes from people all around the world. Some of those are just very thankful that we are providing a little bit of levity in the situation that we’re all in right now,” Woods says. “Others have seen their kids want to build marble runs and they’re getting outside and rolling marbles down the hills and running along with them. Somebody did a marble-themed birthday party the other day.”

Just how did an Iowa guy end up being the English-speaking voice on this Dutch sport? Woods happened across one of the videos and was captured by the novelty of marble racing, but thought the broadcasts could be spiced up by some true-world commentary. He recorded his version of the competition like a horse race, spliced it into the video and sent a link to the brothers in the Netherlands. They loved the idea and Woods was hired.

For Iowans who have a good internet connection and some time on their hands, there’s a wealth of dozens of marble racing videos online, all free, dating back to 2016 — with more routinely being “rolled” out.