You are here: Home / Fires/Accidents/Disasters / Mississippi River expected to crest in Quad Cities 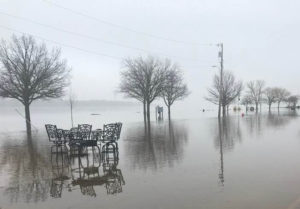 A flooded riverside park in the Quad Cities during April of 2019.

Forecasters say the Mississippi River should crest at the Quad Cities late today or early Saturday around 18 feet — which is major flood stage.

City workers in Davenport took advantage of the dry weather and have finished building a temporary floodwall to protect the downtown. Nicole Gleason, Davenport’s public works director, says crews also set up HESCO barriers, filled them with sand, and wrapped the wall in plastic.

“We’re basically setting it in anticipation of if the river stays high for an extended period and we do get subsequent rain, we wanted to make sure it was in place because it is incredibly difficult to set it in the rain,” Gleason says, “and it helps with the integrity of it.”

Gleason says the floodwall will protect up to five feet over flood stage and the river is expected to crest three feet above. A second row of HESCO barriers, not yet filled with sand, is attached to the first row and can be filled if the river rises beyond the current forecast.